What is the La Bocaina crossing?
It is a swim cruise in the open sea with a 15-kilometer route that separates the exit at Playa Blanca-Yaiza (Lanzarote), and the finish at Corralejo-La Oliva (Fuerteventura). The swim crossing is not competitive, but participatory.

How does the Vulcano Triathlon Club end up organizing an event like this? 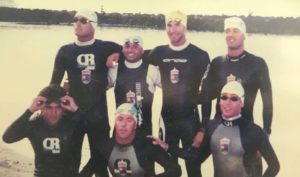 It all started in the year 2000, when some members of the Vulcano Triathlon Club joined together to call attention to the need that Lanzarote had to have a public swimming pool where the swimming activity could be developed. In principle, there were seven participants and today there are more than 100 participants.

What difficulties or risks does it involve to organize a competition such as the La Bocaina Crossing?
There is a risk that something can happen to you that is not controlled by any swimmer. There is a regulation of the Crossing that forces to group the swimmers, depending on their level, in different groups. Groups can not be divided or swimmers separated to have more control.